Hey, you ever wonder, “What’s up there on the roof? 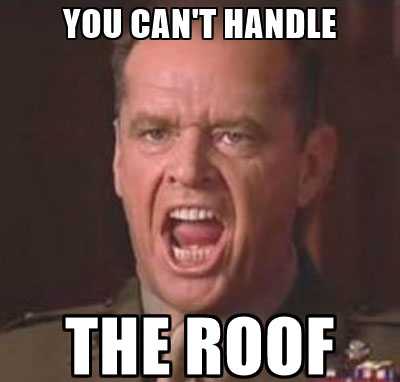 The roof is, indeed, no laughing matter. Roofs demand respect and are to be taken very seriously. The last person who tried clowning around on this roof found himself in quite the predicament:

But not every roof fail ends in a timely (or untimely) death. You can just as easily find yourself falling through a roof. Tim “the Toolman” Taylor didn’t anticipate his fate as he leapt onto this unstable spot on the roof. His rival, Bob Vila, would have probably handled this situation differently:

Sometimes, it’s better to respect the work that the good folks at DirectTV do. Vince Vaughn was probably just tired of hanging out with Robert Duvall when he decided to fling himself and this tiny satellite dish off the roof:

So this next one isn’t quite Hollywood, but “TruTV” has to count for something. This guy thought he was being smooth, and he was able to convince someone to point a camera at him for his feat of gymnastic prowess:

Next up, the classic Hollywood roofing fail from Laurel & Hardy. In this comedy of errors, it would have helped poor Hardy (and the greenhouse) if his ole pal Laurel had given him the signal before popping open the roof hatch:

Sometimes, home renovations can add up to some serious dough. “The Money Pit” offers a great example of Murphy’s Law. Roofs aren’t the only dangerous features atop houses. Chimneys can be pretty tricky, too. In this game of chutes and ladders, Tom Hanks takes an epic spill and takes out the entire operation in the process:

Sometimes, the best fail isn’t a fail–it’s a fall. Mike Douglas has one of the most memorable movie falls, off one roof and through another, In “The Game”:

Tim Allen seems inextricably linked to roof-related accidents. In this particular case, he throws the quintessential roofer off his game. Perhaps Santa had partaken in a few too many eggnog cocktails before he landed on the Toolman’s roof:

Christmas also seems to be the most common time of year to fall off of a roof in a movie. No discussion of roof falls would be complete without the penultimate roof fail: Clark Griswold’s near-death experience in “Christmas Vacation.” We’d be remiss if we didn’t point out that the one thing that kept Clark alive in this scene was a sturdy gutter:

If it were not already obvious, the roof can be a dangerous place. Whether you’re space cadet, a celebrity handyman, an all-American dad, Kris Kringle or a black-hearted villain, you probably shouldn’t spend time on a roof unsupervised. It’s simply unsafe.

Cool weather is around the corner, so now is a great time to look into getting your roof and gutters cleaned, and maybe it’s a good idea to get a professional involved.

The professionals at Ned Stevens are always here for you.

Schedule an appointment today. $25 off gutter cleaning for first-time customers!

Get $25 Off First Time Gutter Cleaning!

Heavy Rain in Atlanta is Damaging Your Gutters & Home: How Can You Stop It?

In Atlanta and the greater Fulton county metro area, the last few years have delivered some of the rainiest stretches on record. With the downpour comes flooded basements, leaky windows, and compromised foundations. While you contemplate the Atlanta rainy season, and all the indoor hobbies that can fill your time, make sure your gutters and […] read more...

The Four Questions to Ask About Gutter Cleaning Services